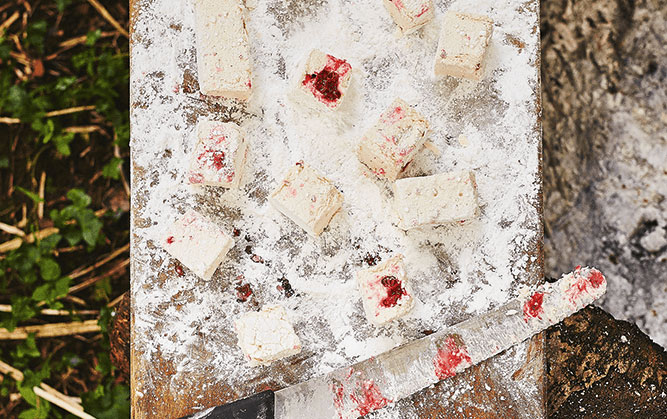 Red’s True Barbecue might sound like it makes its home in the hills of Central Texas. In actuality, Red’s has eight locations across England, in cities such as Liverpool, Manchester, New Castle, Nottingham and London. So you can thank us later for doing the measurement conversions on this amazing Toasted Marshmallows recipe for you.

1. Brush a 8″ x 12″ baking tray with vegetable oil and set aside. Put 1/4 cup of the water in the bowl of a stand mixer fitted with the whisk attachment and add the gelatin sheets. Stir briefly with a wooden spoon to make sure all of the gelatin is in contact with water and leave it to soften while you make the syrup.

2. Heat the sugar, golden syrup, salt and remaining water in a small heavy-based saucepan over a low heat, stirring until sugar has dissolved. Then raise the heat to medium and, without stirring, bring the mixture to the boil. Continue to heat until mixture thickens.

3. Turn the mixer on to a low speed and slowly pour the hot syrup into the gelatin and water mixture, drizzling it in a thin stream down the side of the bowl. When all of the syrup has been added, increase the speed to high and beat for about 5 minutes until the mixture is very thick. Whisk in the vanilla extract until fully combined. If you don’t have access to a stand mixer, use a whisk, following the same process.

4. Mix the icing sugar and cornflour together. Dust the oiled tray with half the icing sugar and cornflour mixture, spoon in half the marshmallow mixture and scatter the raspberries over the top. Cover with the remaining mixture, smoothing the top. Leave to stand, uncovered, at room temperature for 2–3 hours, or until the surface is not sticky and you can gently pull the marshmallow away from the sides of the tray.

6. To serve, place a marshmallow on the end of a long metal skewer, then cook on the grill or over a campfire and eat as close to bubbling without singeing your lips. These will keep in the fridge, packed between layers of greaseproof paper, for up to 1 month.

How to Smoke Tri-Tip Like They Do in Santa Maria