Here’s what you may be missing: underutilized pork cheeks, belly, collar, neck, fresh ham leg, ear and more present major opportunities for your menu and for your margins.

There’s more to pork in BBQ than the big three: shoulders, butts and ribs. Whole-hog cooking is taking over menus and driving innovation in the industry, making for interesting competition and better margins for smokehouses.

Read on for the low-down on whole-hog (and all those great parts) plus when not to buy ham, a great idea for an alternative to pulled pork shoulder you’ve gotta try and more facts on the whole piggy.

Charlie Torgerson, competitive pitmaster, longtime Famous Dave’s executive chef and owner of the recently launched Charlie T’s Food, has become famous for his quirky cuts and creative preparations at his stand at the Minnesota State Fair stand, RC’s BBQ. He’s hip to Pig Ear French Fries, Bacon Chocolate and a 100% Ground Pork Belly Burger (now available to restaurants through Charlie T’s Food). He uses the fresh leg for a slow smoked knuckle sandwich, cooking it to more of a rosy pink, and slicing it like a French Dip. And he can make a nice pastrami out of underutilized muscles.

“It’s still in the BBQ niche because you’re curing and smoking.  It’s not your traditional barbecue. But it’s more of a trendy barbecue,” he said.

In the Southeast, pit crews have known about the powers of whole-hog, open-fire barbecue for generations.

And now, “a lot of folks in the barbecue world are going to that style,” Torgerson said.

And that allows them to use more trendy cuts, like the belly, collar and cheek.

It’s top of mind lately (just check out hashtag #wholehog on Instagram, and this style of cooking hog is getting love on Twitter and Facebook, too. Sam Jones of Skylight Inn BBQ is helping to make it even more popular with his way with whole-hog ‘cue.

Even without going whole hog, you can still make great use of opportunity cuts favored by Torgerson. He likes green or fresh hams.

“It’s a very underutilized, fantastic cut off the pig,” he said.

A new way to pulled pork

One of his favorite ways of using the back leg is a BRT (boneless rolled and tied) fresh ham leg.

“I do a lot of great pulled pork with that. It’s a great alternative to the fattier shoulder. It’s a little leaner. So at the end of the day it’s a healthier choice in the pig world,” he said. 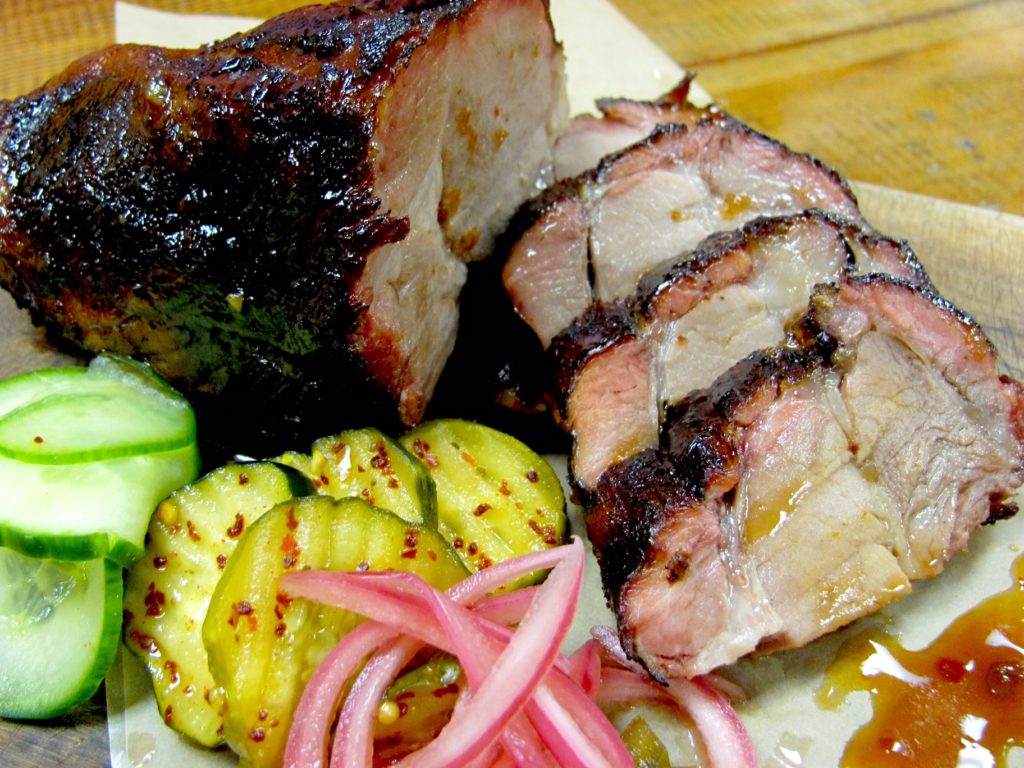 If you don’t want to pull it, take it off at a lower temperature, and slice it for sandwiches. This cut also has a higher pH level, which means it’s going to hold water better and eat better than some of the other cuts of the hog.

“When they think of the leg, people always just think ham, Easter, Thanksgiving and Christmas. They never think about using it fresh,” he said.

When not to buy ham

Because of popularity of the cut during the holidays, it will be more expensive during those periods. But during the rest of the year, it’s an affordable alternative to the usual suspects in BBQ pork. Expect these cuts to run you $0.10-$0.20 less per pound than shoulders and butts, plus more 10-15% product.

“You’re getting a better yield because you don’t have as much fat, internal fat, as there is on a shoulder. So at the end of the day you get more protein,” Torgerson said.

In the restaurant business, that certainly adds up in a hurry.

“Lots of BBQ places in Georgia use it…But the rest of the nation forgets about it,” he said.

It’ll still take you 9-11 hours to prepare it, the same time as a shoulder unless you separate the muscles (outside, inside and knuckle) and use them in a different way.

“You could individually barbecue those muscles. They all react in a different way and you could speed up the process in that way,” he said.

Another underutilized cut he favors is the cheek, serving up sous vide smoked pig cheek and peach glazed pig cheek at that same State Fair stand.

There’s an obvious reason the cheeks are underutilized. There are only two cheeks per hog and there isn’t much volume there. It’s a dark, lean meat. But when done well, they’re great.

“You are either going to love those or you’re going to hate them,” Torgerson said.

It requires patience to get them to the right tenderness. If they are under done and chewy can taste like a turkey gizzard, warns Torgerson.

“They need liquid. So I will braise style smoke those on my smoker or I’ll smoke them in liquid so they take on liquid. It’s like using your smoker as an oven,” he said.

But with these opportunity cuts, you’ll need to practice. If you don’t cook them long enough you’ll end up with a chewy product, one without a great mouth feel.

Torgerson sees this common mistake in pork belly, too. It’s on a lot of menus these days, but it can be fatty and chewy if it’s not rendered out or handled right.

Pork belly isn’t underutilized, according to Torgerson. It is, however, not made right enough of the time. Simply put, too many people are undercooking it, he says.

“Even if they cook it right and it’s soft, they’re just not rendering the fat right so it gets a little offensive,” he said.

For a BBQ application he recommends giving it at least six hours smoke style braise cook at 225-240 degrees, looking for internal temperature of 198-205 degrees for the finish cook. But for him, it’s more about feel.

“I stick that probe in, and it should feel like a soft boiled potato. That’s my feel. It should go in easy, not too tight,” he said.

Be careful not to go too far, and make it mushy, he warns.

The collar is cool

Another underutilized cut he loves to experiment with is the Collar, or Copa, more commonly known as the Money Muscle in the BBQ competition world. But Torgenson handles it differently that BBQ competitors. Even though it’s the same muscle, handling it differently makes all the difference.

“I actually cut it off in the raw form and smoke it separately until it’s butter tender so you can cut it off into medallions,” he said. 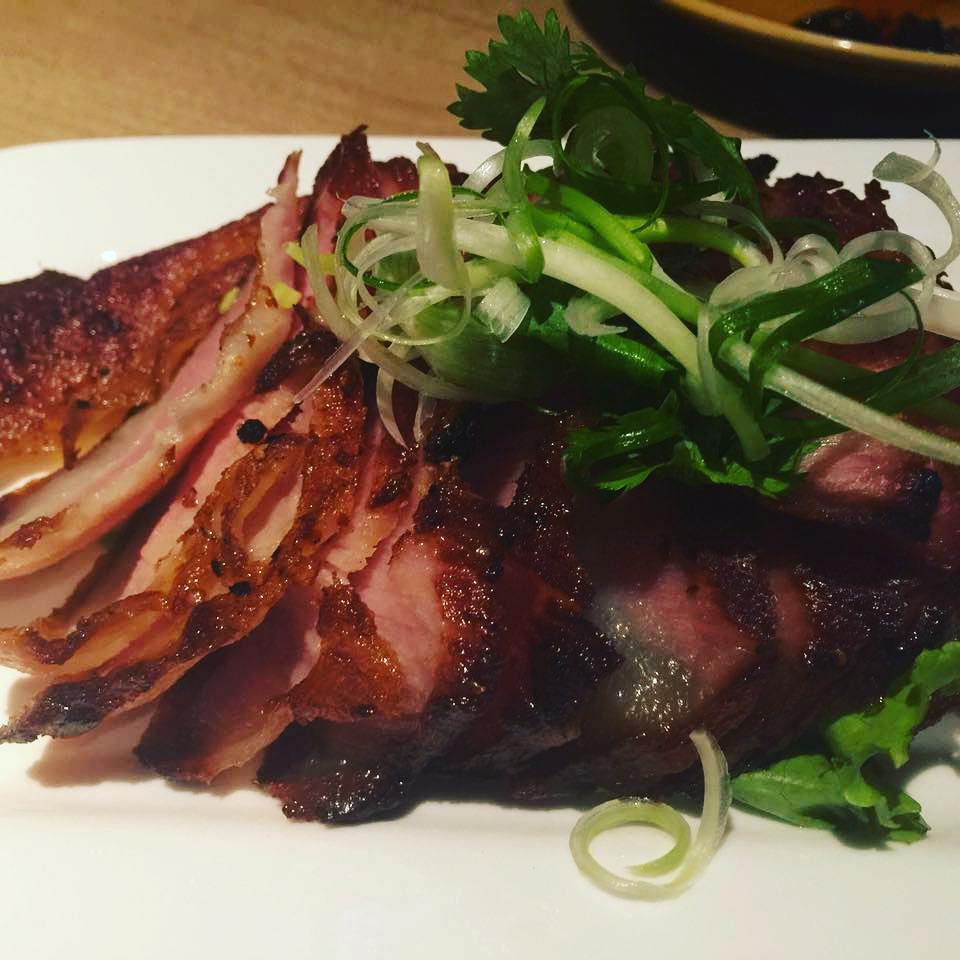 For a nice deviation from pulled pork, he did a Korean BBQ pork collar with a kimchi pickle, garnished with sesame and green onions.

“That was one of my favorite dishes because it eats so well because there’s great internal fat, good marbling, ” he said.

The forgotten cut in all of this is the loin, appealing because of its quick smoke and finish.

“It’s not a sexy cut, but you can do some nice things with it because it’s a quick fire,” said Torgerson.

If you’re not ready to experiment with new cuts, perhaps try fresh, bright new flavors on the cuts you’re already comfortable with. Torgerson encourages those looking to spice it up, to get global with their pork, because it’s mild enough to take on those flavors better than beef. Work in Mediterranean, Moroccan, Indian, or Latin flavors and see what happens!