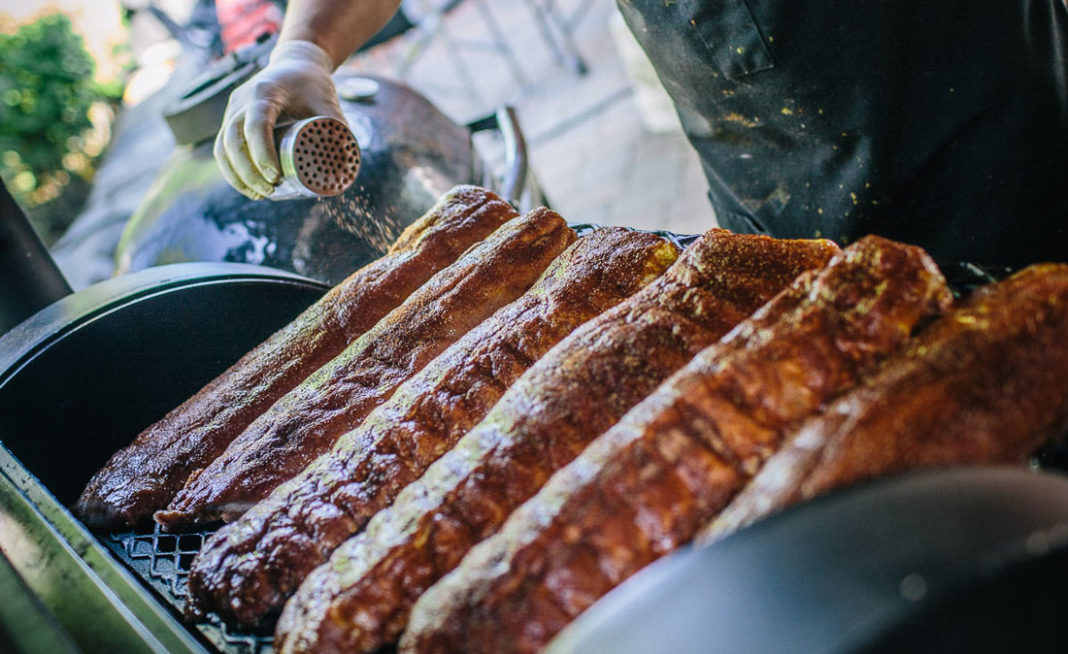 Spice rubs matter so much because—after choosing the type of protein and the cut—the rub is the pitmaster’s first chance to make contact with the meat, to actively alter the entire flavor experience.

The key elements of a great rub (more on that later) work in harmony. Every spice can play a part: soft, smoky cumin reflects the smoke of the pit; tangy, dark paprika adds complexity; fiery cayenne heats things up and sweet brown sugar candies the meat.

It’s not hard to understand why great spice rubs are often described in supernatural terms, such as Mike Mill’s Magic Dust Spice Rub, which works its mojo with a straightforward blend that’s stood the test of time (and competition).

Like a lot of magical things, there’s a bit of a scientific explanation with rubs, and that begins with a ratio, whether you have a lot of ingredients in your rub or just a few. And deciding whether to use a universal rub or create a different rub for different proteins is a path you must choose on your own. But we’ve got some hints and tips. Read on for advice on how to rub the right way.

Do: Get the ratio down, then get creative

To House of Q Pitmaster Brian Misko, the number of ingredients used in a rub ain’t nothin’ but a number. Instead, your focus should be on balance.

“A barbecue rub needs to have balance, and that means 1/3 salts, 1/3 sugars and 1/3 fragrant spices,” says Misko, whose House of Q is both a competition barbecue team based in Canada and a maker of spice blends, sauces and cookbooks.

Meet that three-part ratio, and the number of ingredients or simplicity of the rub recipe is up to you. Expand your rub ingredient list with savory spices and fiery hot chili powders as well.

“As for how many spices it takes, that doesn’t really matter,” he says. “If it ends up being 200 spices to make up that ratio, then it’s 200 spices. If you can do it in three ingredients, then that’s what it is. Perfect balance.”

Misko learned many barbecue lessons like the 1/3 rule from Paul Kirk, “The Baron of BBQ” from Kansas City, who has won hundreds of awards and founded the Kansas City Barbecue Society.

“When Paul Kirk taught his classes, he identified that you are to plan for 1/3 of the volume to be salt. If you have garlic salt in your hand, that counts for salt,” Misko says, adding that all three elements play a part and cautioning against leaving out any part.

“Can you create a rub without sugar? Of course. However, in my opinion, and in my experience, it’s clearly outside the norm,” he says. “While pitmasters are smoking and creating flavor, the sugar dissolves and caramelizes on the outside of the meat, thus creating the crust or bark. This crust is the character that all pitmasters are judged on.”

Many pitmasters find a rub they love and discover that it works great for everything from pork to beef to chicken legs. Another option is to create different rubs for different proteins. If you go that route, keep in mind which spices naturally gravitate towards which meats. Here are some pairings developed by the spice experts at Spices Inc. that you can use as a reference/jumping off point:

Some elements of spice rubs that work on just about everything include black pepper, paprika, brown sugar, cayenne and sea salt.

Do: Know your own essentials

Here’s a fun way to think differently about your rub. Play the “Desert Island Game.” If Misko was stranded on a desert island and could only bring a few spices for a rub, he says all he’d need would be seasoned salt (with MSG), granulated garlic, black pepper, granulated onion and dehydrated basil. Think about what you would select for your “desert island” spices if you need to drill down to what really matters in a rub.

Don’t: Judge a rub in its raw state

According to BBQ legend Meathead Goldwyn, tasting a raw rub won’t give you the whole picture: “A rub may taste too hot when raw, but keep in mind there will be a bite-sized piece of food underneath it diluting it,” Goldwyn writes on his website.

Don’t: Be afraid to find your own secret ingredient

Using ingredients that stray from the expected is another way to customize and try new things with rubs. You may be surprised with what you come up with. Lately, Misko has been experimenting with new rub ingredients, including nitrates, sulfites, liquid capsicum extract and hydrolyzed soy protein.

One ingredient Goldwyn feels strongly about is powdered rosemary. Some of his readers balk at its inclusion in Goldwyn’s Memphis Dust, but Goldwyn counters: “Trust me, it hides in the background and you will never know it’s there. But it is. It is subtle and important.” If you can’t find finely ground rosemary, Goldwyn recommends grinding your own dried rosemary leaves in a mortar and pestle or coffee grinder.

Do: Consider a Foundation

Some pitmasters swear by a thin layer of oil, mustard, Italian dressing or “slather” on the meat—especially brisket—to help the rub adhere to the meat. Others say it isn’t really necessary. The consensus seems to be that mustard doesn’t affect the taste much, making this more of a method to help the rub stick. Some claim it produces a better bark, and another way to boost flavor is to mix a bit of the rub into the slather.

Don’t: Get ripped off

If you decide to purchase a rub from a manufacturer, there are some things to be aware of.

“Over the years, black pepper has nearly tripled—if not quadrupled—in price,” Misko says. “To mask the challenge, many spice suppliers have provided sub-par spices to commercial suppliers, which in turn end up in consumer products.”

This leads to less flavor and blander rubs. Also, keep an eye out for fillers or “stretchers” in rubs. “Do your homework for consistency,” Misko advises. And yet another thing to watch out for is molasses, which became an issue for House of Q when they found the sugar content had changed significantly.

Make sure to check out the ingredients in BBQ Industry’s – The Pitmaster Blend. The blend’s main ingredient is the finest quality peppercorn.  Read all about it by clicking here.